Put on your pajamas and get to bed...it's time to go to sleep.
After seizing the podium and protecting it from the PRD, deputies of PAN and the other parties settled in for the night. Videos of the event posted on El Universal indicate that pillows, blankets and even pajamas were brought out.

A link at http://www.eluniversal.com.mx/graficos/sanlazaro3/index.html# captures the legislators settling in for the night. The picture immediately to the left shows a couple of the legislators tucked in and protecting their view of democracy.

I don't know who these deputies are, but they appear to be men who might have been young students around the time of the "dirty wars" or perhaps were even participants in the protests that tragically ended with the massacre of students at Tlatelolco.

For some strange reason, this whole event reminded me of a poster that was given to us by Kris Purdy when she returned from Mexico in 1968. I wasn't in Mexico that summer, but many CIASP'ers were there in Hidalgo. Kris brought us a wonderful gift of a dozen lithographed posters of the student protest.

I scanned part of one poster and pasted it here. The students in 1968 were treated as insignificant complainers by the government of Gustavo Diaz Ordaz and Secretary of Gobernacion Luis Echeverria. The poster below has a caption that ironically dismisses the students by telling them "Put on your pajamas...get in bed...because it's time to sleep". 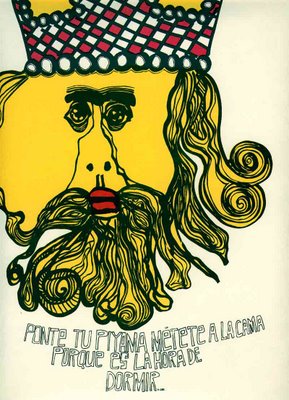 Perhaps the deputies in San Lazaro should also consider giving it a rest, or at least recognize that they're following the same advice dismissively given by paternalistic government to dissenters 40 years ago.
Posted by James Creechan at 11:18 a.m.