Compared to Mexico, Canadian politics is downright sane and rational. This may sound like the wild-ramblings of someone who hasn't been paying attention to the current debate over "who's Québécois?", "who's most suited to lead the Liberal Party...an intellectual who lived most of his life abroad in ivory towers...a reformed New Democrat who is backed by the Liberal backroom boys...or perhaps a quiet francophone intellectual who named his dog Kyoto?" or "what costume will make Prime Minister Harper look uncomfortable and ill at ease?".

In contrast, consider what has taken place in Mexico over the past two weeks.

The loser of the popular vote in July, Andres Manuel Lopez Obrador (AMLO to friends and supporters), declared himself the president by Popular choice and appointed a cabinet on a national holiday celebrating the Mexican Revolution. He did this in Mexico City's main square (the Zocalo)— cheered on by tens of thousands of supporters — and while a parade of historically-outfitted revolutionary participants commemorating the civil war that killed millions of Mexicans converged on the capital from three directions. I didn't see any recent reports that there was a re-enactment of a famous meeting with Pancho Villa at the Bar Opera...but certainly there were gatherings in many bars saluting self-proclaimed Presidente AMLO with toasts.

Meanwhile, the location for elected legislators (San Lazaro) was encircled by newly placed security fences, and patrolled by both police and army in anticipation of potential trouble on Dec. 1st. This is the day that the actual winner of the election was to take an oath of office.

At the stroke of midnight on Thursday the 30th of November,Felipe Calderon Hinojosa became the new President and Mr. Vicente Fox Quesada became ex-Presidente Fox whose only concern was a retreat to his ranch in Guanajuato accompanied by his leading lady Doña Martita. It's uncertain whether Martha's sons will join their step-parents, or continue in their business pursuits that have made them incredibly rich during the presidency of their new father Vicente.

Aside from the fact that there is a new President, other facts were unclear as of November 30. By tradition, the former president presents a sash of office to the new president in the legislative assembly (San Lazaro). The incoming president then offers an oath of office before elected deputies in San Lazaro's Chamber of Deputies. Technically, none of this is constitutionally required, but the ritual is a long standing tradition emerging out of the Mexican Revolution.

Unfortunately, it seems that the new President was not really be welcome to enter the Chamber of Deputies...or at least wasn't invited with open arms by all of the elected members. And so, there was a rugby style scrum earlier in the week to "seize" the podium and carry out a strange version of a filibuster...except there no words and only pushing and shoving and a few punches...almost like the line-up here in Toronto last week among the people waiting to purchase X-boxes. The Partido Accion Nacional (PAN) managed to win this scrum and establish control over the podium, and their beefy presence physically kept the Partido Revolucionario Democratica (PRD) at bay.

As the deadline for transfer of power approached, PAN deputies continue to occupy the podium after a two-day sit–in and PRD members remained sitting like vultures in the chamber waiting to pounce on any weakness or open spot. PAN deputies were holding firm and save the podium for its leader, the new President and hoped that he would enter the chamber and swear his oath of office in the traditional spot...PRD remained on guard hoping that at least a few deputies would blink and let them take over the podium and thus prevent a new neo-liberal president from standing there to promise dedication to the constitution of 1917 and its revolutionary principles.

Pillows and Blankets were delivered to the PANistas occupying every inch of the podium, but apparently many preferred to remain awake all night singing traditional Mexican songs...probably the entire repertoire of José Alfredo Jimenez,Juan Gabriel and probably the sad and tragic songs of Miguel Aceves Maciel who died a couple of weeks ago. Apparently they serenaded the sunrise each day with a rousing version of las mañanitas — appropriate action for cock-of-the-walk roosters. 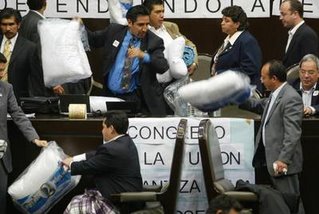 No matter how this standoff ends, there will be a new president on December 1, even if no-one knows where he finally gave his allegiance to the country and democracy, or where he collected the sash of office from ex-Presidente Fox. He really wanted to go to San Lazaro and stand on the podium, but wiser counsel was arranging alternative locations and a plan B. It's also unclear whether Vicente Fox even thought about appearing in person beside Mr. Calderon, because a significant number of people in all parties are mad at Mr. Fox and his wife and believe that he spent the past few years of his sexenio in a world of his own imagination that they pejoratively call Foxilandia. It's sort of like Michael Jackson's Neverland!

And while this pillow fight continued, an incredibly violent teacher strike raged on in the beautiful city of Oaxaca. Teachers have been protesting for more than 6 months about a corrupt governor who refuses to resign. There have been many violent clashes and deaths, including that of an American photographer. Participants in the protest movement (APPO) are being arrested and dragged away from the protest lines and shipped to penal institutions in distant States. President Fox did not take the protest seriously when it began, and when he eventually acted he managed to create even more violence. Now, it's become the problem of the new President and a newly appointed "crack-down on dissent" minister of the interior.

The winner of the election, Felipe Calderon was busy appointing his new cabinet and presenting them to the press over the past few weeks. All are party loyalists, and stand for nothing new or visionary. His most controversial appointment was Francisco Ramírez Acuña who brings with him a hard-line, law-and-order, crack-em-on-the-head approach to protest and dissent. Even members of his own party warned him that this was an inflammatory choice and a dangerous move. Ironically, the appointment was announced on the same day that a warrant was re-issued for Luis Echeverria, another wealthy ex-presidente, and head of Gobernación under Presidente Gustavo Diaz Ordaz. Luis Echeverria was fingered in a lengthy and well documented report of being the trigger-man, or more correctly the intellectual author, of the so-called Dirty War of the 1960's and 1970's. Just last month, a massive report about the abuses and killings of the dirty war were published. I gather that Felipe Calderón has not had time to read this report because he's been too busy trying to find out where and how he can get the Presidential sash.

Meanwhile, on the northern border with the USA, there's real talk of building an actual impermeable wall to seal out Mexican immigrants. Ironically, the most concrete plans speculated that it would be possible to use Mexican immigrant labour to build this wall more cheaply. After all, there are an estimated 8 million of them working for slave labour in the United States. American nativists calling themselves the Minutemen, are patrolling areas where there is no wall with the hope that they can catch the illegal immigrants and turn them over to Border Patrol. Seriously, they have distributed T-shirts to some of their captives that say the equivalent of "I came to the USA and all I got was this lousy T-shirt telling me to leave".

A little further south, in the State of Sinaloa, an entire village of 21 homes was burned to the ground by narco-raiders, and a car carrying children was the target used for an "ajusticimiento de cuentas" (adjustment of accounts) by narco-competitors. The massacre of 3 children was a first in the extremely bloody drug-wars that have brutalized Mexico in the absence of strong government. But, what really upset the good citizens who voted for the President and the deputies who are in the pillow fight was a recent assasination of a Mexican narcocorrido singer Valentín Elizalde in Ciudad Reynoso this weak. His funeral attracted tens of thousands of adoring fans and overloaded mytube.com with tributes. He has become the latest Mexican iconic hero overnight, and those fighting for the podium in San Lazaro have been reduced to insignificant status in the minds of the public.

Oh well, it's time to watch the Liberal Convention and feel rational.

P.S. The movie Babel by Mexican Director Alejandro Gonzales Iñarritu is highly recommended. The confusion described beautifully in this film makes much more sense than the actual events in Mexico.
Posted by James Creechan at 12:45 p.m.

A follow-up story about the swearing-in of Presidente Felipe Calderon is found at the following link. http://www.mexiconews.com.mx/miami/22201.html