Correo Canadiense is a national newspaper serving the Spanish speaking communities of Canada. An article published in the Dec. 15—21 edition describes an organization named Pueblito Canada.
Pueblito is a voluntary, non-government organization that supports projects to improve the lives of children in Latin America and the Caribbean. For 30 years, it has worked co-operatively with local non-government organizations to implement a variety of intitiatives.

It has supported projects in Mexico, but currently allocates its resources to specific projects in other Latin America and Caribbean countries.

Pueblito Canada is a registered Canadian charity and issues tax receipts for donations. More details about Pueblito are found on its web site (http://www.pueblito.org). The site also includes a direct link to make a donation. 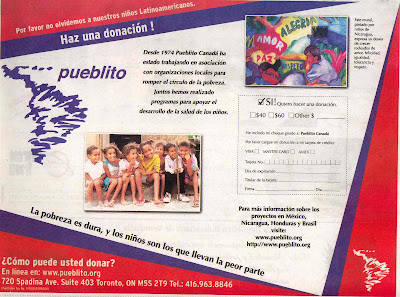