The following e-message raises an issue that should anger CIASP veterans.
First, KAIROS has been one of the few Canadian agencies that consistently works to promote human justice issues and sustainable development in Mexico and Latin America.

Second, KAIROS has played a very active role in documenting the environmental chaos and abusive labour policies of Canadian mining investments in the San Xavier mine located in San Luis Potosi — not far from the CIASP villages and ranchos.

Third, CIDA funding is increasingly and narrowly restricted to projects that reward Canadian Business Interests and Investments. The social justice element of Canadian foreign policy has been specifically targeted for cuts.

Fourth, CIASPer John Dillon has dedicated much of his working life to preparing documents and research reports documenting social justice for KAIROS.

Please read the following message and take a few minutes to act on it. I would also suggest that any CIASPer with a “portofolio” should review their investments to see if they include Canadian Mining projects in Latin America. Canadian mining intersests in Latin America, and in many other places of the world have been linked to unfair labour practices and environmental rape.

More information about the cuts are reported in the Globe and Mail http://www.theglobeandmail.com/news/national/ottawa-ceases-funding-of-overseas-human-rights-group/article1386567/). I’ve also included one news item (from amongst several) reporting on the environmental and labour disruption linked to the San Xavier project in San Luis Potosi ( http://www.jornada.unam.mx/2009/11/26/index.php?section=sociedad&article=043n1soc) 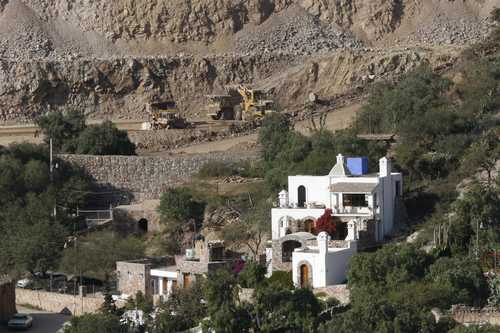 On November 30, KAIROS received notice from the Canadian International Development Agency (CIDA) that our project proposal for 2009-2013 had been declined. We were not given an explanation for this decision, other than that our program did not fit CIDA priorities.

Our 2009-2013 proposal was developed within two priority sectors of CIDA: promoting good governance (human rights) and advancing ecological sustainability (reducing the impact of climate change and addressing land degradation). It was approved at every level of CIDA before being declined on November 30.

This decision terminates a 35-year history of cooperation between CIDA and KAIROS and its predecessor organizations, and compromises the work of human rights and ecological integrity in the developing world. (For possible impacts on specific partners, please see the background materials below.) This decision also negatively affects the ability of Canadians to develop skills and knowledge in the exercise of their global citizenship.

Please contact your MP to discuss this urgent matter. Please, respectfully and politely,

- KAIROS submitted a 4-year program proposal to CIDA on human rights and ecological sustainability. The total program cost of the proposal is $9,211,483 over four years (CIDA contributes just over $7 million of that amount). This is consistent with previous levels of CIDA funding to KAIROS.
- On November 30, we received a call from CIDA informing us that our 2009-2013 program proposal had been rejected and that KAIROS would no longer be receiving funding from CIDA. We asked for an explanation and were informed that our program did not fit CIDA’s priorities. This was the last day of an extension to our current proposal. No written explanation has been provided.
- This decision, if not reversed, would cut funds to 21 ecumenical and citizen’s organizations in Latin America, Africa, Asia-Pacific and the Middle East, and cut educational work that helps Canadians across the country to develop skills and knowledge in the exercise of their global citizenship.

Impact of the decision

This message was sent from KAIROS Canada to Patricia Smiley . It was sent from: KAIROS, 310 Dupont Street Suite 200 , Toronto, ON M5R 1V9, Canada. You can modify/update your subscription via the link below.   Email Marketing by <http://www.icontact.com/a.pl/144186

I admire what you have done here.Good post….thanks for sharing..