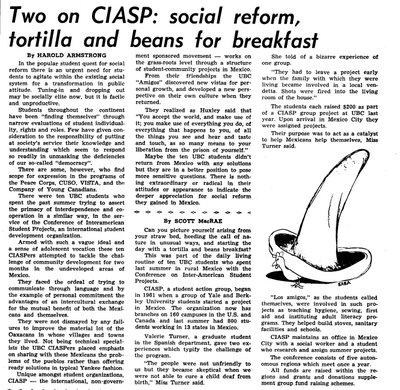 Posted by James Creechan at 2:53 p.m. No comments:

Posting Images on this site
Please consider posting your archival photos and images of CIASP. At the Toronto reunion, people brought a fantastic collection of older pictures and slides. Consider putting your favorite pictures online.
Images are posted to this site in different ways:

What a great weekend we had ! What fun to see you all again ! The song, "Easy Come Easy Go " keeps playing in my head these past 2 days. = "Say hello and good bye and wish you all the best"

Thanks so much, Doug for the list and all those pictures which came to us so quickly. You sure captured the spirit of the event.

I must confess, before the weekend, I was debating about sharing a passion I`ve had for many years; to return a blessing in some practical way, to the rancho people of Mexico. I wasn`t sure if it was appropriate to mention it to a group who were coming specifically to reconnect with one another. It took a big leap of faith and I hope I didn`t offend anyone.

However, for those of you who left before my sharing , allow me to explain that I am on the board of "Come to the Waters Ministries", a charity recently set up primarily to help the poor and indigenous people of Mexico. Armida, a Mexican lady who lives here in Lindsay and who goes to Mexico each winter with her husband, is the president of this charity This past winter she was asked by the people of a rancho ,Tamarindo, where she was visiting, to help finance a multipurpose building for a school,community centre and church. This small rancho is in the state of Oaxaca, south of Hidalgo and the building will service 2 adjacent ranchos as well. This new charity had no money for the project so I thought of CIASP and wondered if any one else might be feeling the same desire to give back a portion to those who gave so much to us. This Rancho Tamarindo, could represent all our ranchos and it`s at the same poverty level ours was 40 years ago !

Well, I offered the opportunity on Saturday night and 3 gave me filled envelopes .I went to bed that night asking the Lord to bless and provide if He wanted this project to succeed. I thought it was perhaps unfair of me to expect people to give on the spot with no prior warning The next morning a few more gave me their envelopes.Others promised to mail in their donatuion .

Today, Armida and another member counted the donations from the weekend event and told me that

THANK YOU GOD-YOU DID ANOTHER LOAVES AND FISHES` TRICK !!

I was shocked and overjoyed. at the generosity of 8 people.Your spirit of compassion as well as a desire to return the blessing is SO encouraging. That`s over 10,000 pesos !!

The organization in Mexico we are working with is made up of representatives from 5 different Christian churches and call themselves "llamados Para Servir" = " Called to Serve". They will oversee the project and make sure the money is spent only for land purchase and building materials. One of these leaders is driving to St. Catherine`s , On for a wedding in early July, so I may have the opportunity to meet him in Toronto or Lindsay. If so, I`d like to give him a cheque from CIASP with an explanation of who we are .If enough money comes in I`ll ask if we can dedicate the school with the CIASP-CIPE name and logo. Will keep you posted.

If any of you who didn`t take an envelope would still like to donate, you can make your cheque payable to:

"Come to the Waters Ministries"
1 Shirley Anne Dr. S
Little Britain, On
K0M 2C0
All donations above $10 will be receipted and 100 % of money collected will go toward this project. We have waived any administrative fees.

Please mail your donation by July 4th if possible so it can be given to our Mexican jefe while he`s here.

The CIASP spirit is alive and well !
Look forward to keeping in touch.
Warmest regards and abundant blessings,
Corinne

What a great time we all had at the reunion! Thanks to everyone who was there. YOU are what made it such a special time!

I have posted some pictures from the weekend on a CIASP page on my web site. To get there click HERE and follow the link from there for the pictures. There is also a link to the other web sites hosted by Jim Creechan (www.ciasp.ca) & John Vella (ciasp.tripod.com).

Enjoy - and everyone keep in touch!
Doug

Basic FAQs for "ciasp.blog.com"
The underlying principles of this CIASP Diary blog site are:
Posted by James Creechan at 12:22 p.m. No comments: 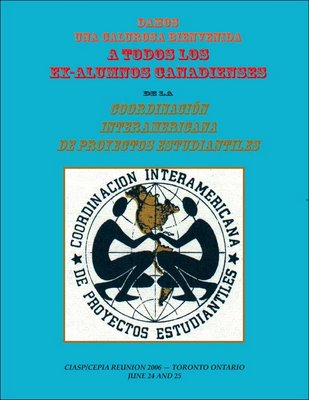 On June 24 and 25th, more than 50 ex-alumnos canadienses de CIASP Canada gathered at Toronto's Scarboro Foreign Mission center to meet old friends and relive experiences from forty years ago. There were earlier regional CIASP/CEPIA reunions — Toronto's organized by Bruce Weber in 1984 & Ottawa's hosted by Jean Quesnel in the late 1990's — but Reunion 2006 was truly a national gathering because the internet made communication possible even after many years of lost contact.
CIASPers came to Toronto from across Canada, and reconnected with dear friends for the first time since the 1960's. Many brought their amazing archive of photographs and slides, and some people even dragged out dusty old souvenirs collected in the Huasteca Hidalgo. Of course, everyone shared memories and told their true tales of unforgettable adventures and misadventures. As things wound down on Saturday night, our "venerable" CIASP elders shared their personal memories of CIASP's beginnings in 1963, while many others variously related their happy, unusual, emotional and sad remembrances from times in the Huasteca and the lasting impact this had on their later careers in Canada. We also learned more about CIASP's final demise in 1970.
The only concrete archive of CIASP-Canada resides in the collective memory of we 700+ CIASPers , and this 2006 gathering was a living example of how long-ago events can continue to generate joy, sadness and even the personal validation of a youth well-spent. Beyond everything else, the pictures and stories from those days made us laugh and smile with fondness as we remembered the incredible patience, generosity and kindness of our Mexican hosts.
Although the internet allowed us to resurrect a long lost connection, the fact is that reunion 2006 would never have taken place without the persistence and dedicated commitment of Joe Lynch. He forged ahead to make it happen, and he created an organizing committee that brought it about. Without Joe, our personal connection with each other would no doubt have remained circulating endlessly in cyberspace.
CIASP Diary has been established for the purpose of keeping us in touch.
Please contribute to it and share your thoughts about CIASP.
Posted by James Creechan at 1:38 p.m. 2 comments: