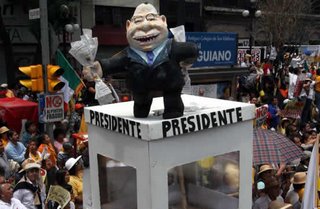 Massive Rally in Support of AMLO on July 16
As many as 1 million protestors gathered at the Zocalo yesterday to protest the July 2 presidential election and to support Andrés Manuel López Obrador (AMLO). The protestors had gathered from all parts of the country, many having started the march to Mexico City last Wednesday from State Capitols. Sunday masses in the Basilica were cancelled because of the congestion, and Security Forces of the Justice Department stated that it was one of the largest mass rallies to ever take place in downtown Mexico.

AMLO marched beside the prominent leaders of the PRD (Partido Revolucionario Democratica) leading the masses waiving yellow and black colours of the party. One ingenious float contained a papier-maché caricature of Felipe Calderón stuffing ballots into the clear ballot boxes used by the Federal Electoral Institute in all elections (Foto by Jorge Rios of El Universal-Mexico. During AMLO's speech, he was very careful to remind his supporters that protests must be peaceful and that they should obey the law and avoid confrontation. However, he repeated his call for a "vote by vote" and "poll by poll" recount of the ballots from the July 2nd vote.

The final vote has not been certified by the 7 magistrate tribunal, and the federal electoral legislation does not require a final certification before September 6. It should be recognized these challenges to the results are proscribed by the legislation and are legal elements of the electoral process. Both the PRD, and the victorious PAN have filed complaints before the tribunal, with the PRD registering the majority of complaints based on an assertion that as many as 60% of the polling stations had irregularities. The specific grounds for challenging the polling results have not been fully documented to the press or external observers, but there have been general charges of "ballot stuffing" in some regions. The total margin of victory by Felipe Calderón Hinojosa currently sits at 243,000 votes, and the PRD continues to argue that this is the result of organized ballot stuffing. There were 130,000 polling stations for this election, and an average of about 2 votes per polling station made the difference — and arguably a recount might easily overturn the process by including some discarded ballots and excluding questionable ballots. Of course, the assumption is that this will overwhelmingly favour the PRD!

One other issue has been raised concerning the actions of some members of the PRI who worked to support Calderón Hinojosa. In particular, a senior party member associated with the old guard of PRI (los dinosaurios) named Elba Esther Gordillo was recently expelled from the party because of her support for Felipe Calderón. Although it has not been directly stated, the implied accusation of PRD is that elements of the PRI resurrected "old style cheating" — el fraude a la antigua.

But most PRD arguments challenge the conduct of the Partido Acción Nacional before the election. In particular, they've criticized Vicente Fox Quesada for his involvement in the election (limited under Mexican Law), accuse PAN of using illegal campaign funds from business and foreign sources (again, tightly controlled under Mexican Law), blame the IFE (Federal Electoral Institute) for not acting quickly enough to remove offensive campaign ads produced by PAN (these falsely linked AMLO to Hugo Chavez in Venezuela and raising the possibility of a US intervention if a leftist won), and also accused IFE of allowing PAN to tamper with the vote count.

There is no provision for a hand recount of ballots, but the PRD insists that this be done. It has also called on its supporters to monitor the 300 centres where ballots are stored to make certain that these are not destroyed. Most observers believe that the actual count of ballots was fair and above reproach, but supporters of the PRD do not have the same level of confidence in the "computer" count. The ghosts of 1988 election fraud continue to haunt Mexico, and the abuses of earlier PRI governments provides an important subtext and justification for the current challenge and unwillingness to trust the July 2nd vote.

Political observers have taken a relatively uniform position that IFE is above reproach in its count and processing of the existing ballots, but many of them have suggested that the only way to end the impasse is to conduct a poll-by-poll, vote by vote count to demonstrate that the election was transparent and fair. The public is not so certain that this is necessary, at least as public opinion is measured by opinion polls. Most of the recent polls indicate that about 37% of those interviewed are in favour of a recount — approximately the same percentage of people who voted for the PRD and AMLO in the election. The rally on Sunday was large by any count and is recognized as one of the largest demonstrations of "street power" ever. There are more than 25 million residents in Mexico City and D.F., and the rally represented a significant proportion of the entire population.

Meanwhile, Mexico is still in "limbo" and uncertain about what will happen in September. The transition of power does not take place until December, but Felipe Calderon cannot create a transitional government until he has received the certification of the electoral tribunal. The Mexican stock market (the Bolsa) has been reflecting this uncertainty, and all other institutions will also remain in a state of flux and limbo until the election has been resolved. The power of government and executive action rests in the President's Office (usually referred to as Los Piños, the equivalent of the White House) and the allocation of resources for Public Security, Education, Social Services and all other services are on hold and in an ambiguous state until the issue is resolved.
Posted by James Creechan at 11:01 a.m.

This is another followup story about the challenges to the election count.