Elections 2006: Mexico Divided and in Limbo 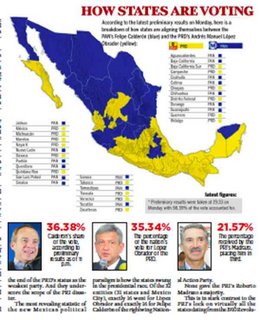 NO WINNER YET
The election results of July 2 have not yet been certified by IFE (Instituto Federal Electoral), but a preliminary posting of results (PREP) indicates that Felipe Calderón Hinojoso(PAN:Partido Accion National) holds a slim lead over Andrés Manuel López Obrador (PRD: Partido Revolucionario Democratica and head of a coalition called la Coalición por El Bien de Todos). With 98.45% of the districts tabulated, Felipe Calderón has 36.38% of the total vote and Andrés Manuel Lopez Obrador has 35.34%. He has a lead of about 400,000 votes from among the 40 million ballots cast (a turnout of just under 60%)

The vote certification will, almost certainly, not be routine and it will be contentious. The counselors of IFE (a body of 300) will gather on Wednesday to begin deliberation and certification of the count. IFE also deals with complaints, appeals, protests and has the power to conduct a recount if necessary.
IFE
Mexico established IFE with international support in the mid 1990's with the goal of eliminating corruption and manipulation obvious in the 1988 presidential election. Cuauhtemoc Cardenas Solarzano was the standard bearer for a new leftist party that became the PRD, and was definitely leading the 1988 presidential election until election computers mysteriously crashed. When they came back online, Carlos Salinas de Gortari was declared the winner with a solid majority. Salinas de Gortari (PRI: Partido Revolucionario Institucional) carried out a major program of pro-business neo-liberal reform (i.e. free-market policies), successfuly "fast-tracked" NAFTA and dramatically changed the Mexican economy. Elections of 1994 were "cleaner" on the surface since they were conducted under close international scrutiny; but it's also agreed that the PRI bought the election and used both heavy-handed and subtle strategies to corrupt the vote. (See Andres Oppenheimer's 1996 book called Bordering on Chaos)
IFE was created with international cooperation and with enthusiastic participation of many student "leaders" who had been driven underground after the 1968 and 1971 massacres authorized by the PRI. This middle-aged generation of idealists were committed to democratic openness and responsible for the initial creation of the IFE (e.g. José Woldenberg). Canada played a major part in establishing this institution, and chief electoral officer Jean Pierre Kingsley was a prominent consultant and advisor for this project.

ELECTORAL PROCESS
IFE distributes campaign funds and sets rigid limits on spending. It even has the power to order advertisements pulled from the air: for instance, negative campaign advertisements linking Andres Manuel López Obrador to Hugo Chavez were ordered off the air. The timing for campaigns, the financing, the verification of candidates and all other matters are regulated by IFE to a much greater degree than elections are regulated in Canada by the Federal Electoral Commission.

IFE oversaw the State elections and Mexico City elections of 1996 where Cuauhtemoc Cardenas was elected mayor. (It was the first time Mexico City had elections for mayor and council since the 1920's). In 2000, the experience gained in the 1996 and 1968 elections allowed IFE to oversee the "cleanest" set of elections in modern Mexican history. Vicente Fox Quesada was elected president and the PRI lost the presidency for the first time in 71 years.

I have been an observer in Mexican elections, and electoral preparation and controls elections are much more stringent and rigid than we are accustomed to seeing in Canada. There is a national voting list containing a small image of the same voting card that every Mexican voter must show at the poll. The card has a picture of the voter, and it must be placed beside the master list before a person is given a ballot. If the picture doesn't match, the individual cannot vote. Ballots are numbered with unique serial numbers, and 1/2 of the ballot is given to the voter to mark in a balloting booth; the stub is scrutinized, the serial number listed beside the voters names and stored in a special box that is sealed after verification. Completed ballots are placed in "transparent boxes". Polling stations votes are tabulated by a local committee selected at random from the voting list, and the count scrutinized by all parties and open to international observers. The sealed boxes are delivered to centres managed by IFE where the local results are verified a second time before counting. By all measures, the process appears to be rigid, efficient clean,— especially in the urban centres.

CITIZENS AND DEMOCRATIC PROCESS
But in spite of these measures taken by IFE to produce untainted results, most Mexicans continue to mistrust the electoral process. There remains very little public confidence that elections are free of corruption and manipulation. During the past few days, several polls have indicated that many people think that the present election has been fixed. For instance, a poll carried out b y the respected magazine Proceso suggests that more than 70% believe that the election results are being delayed on purpose because PAN knows that it lost but is manipulating results behind the scenes.

Mexico has made great strides towards an open democratic process, but is a country deeply divided. People still lack the absolute confidence that the elections were clean and fair, and they suspect the worst. As of today, there are as many as 3.5 million votes that seem to be unaccounted for. The percentage vote count is not 100%, and the numbers of exiting voters counted by party scrutineers is higher than the number of votes posted by IFE. The IFE counselors will be confronted with a major challenge to reconcile the numbers and demonstrate that the vote was clean and transparent. Unfortunately, the vote is so close (400,000 votes difference) that unaccounted-for 3.5 million ballots must be justified before IFE will gain the confidence of the public. The situation is doomed to be chaotic for several weeks if not months.

LESSONS AND TRENDS?
But there important messages that can be taken from this recent election, even during this tenuous and chaotic preliminary stage.
Posted by James Creechan at 11:20 a.m.