Politics and the Catholic Mass 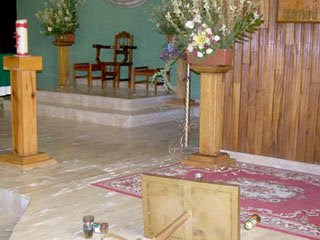 Tales of 2 Countries:
and profane sacraments.

I'm certain that most Canadians read about the recent controversy involving a report about Stephen Harper and the "alleged pocketing" of Holy Communion during the funeral mass for the Right Honourable former Governor General Romeo LeBlanc. It had serious consequences for the New Brunswick newspaper St. John Telegraph-Journal—including the resignation of a scion of the powerful Irving family clan from the newspaper and an extremely rare front-page apology to the Prime Minister. (picture above from Milenio.com )

Meanwhile, in Mexico, the Mexican SSP working hand in hand with the American DEA raided a Michoacan church during Mass and held everyone at gunpoint. The action is being defended by the government and it has advanced arguments that there was special protection or tradition limits the use of such force. It did lead to 33 arrests, including that of a big fish nicknamed "La Troca" (Truck) who allegedly is the capo in charge of the largest export of synthetic drugs to the United States.

Here's an English language report of what happened last Saturday evening (August 1, 2009) during a mass to celebrate "la quinceañera" of a parishioner's family in the state of Michoacán Mexico. The federal security forces were looking for leaders of one of the 8 cartels currently involved in a bloody battle with the government and with each other. La Familia de Michoacan is a very strange group of drug dealers who specialize in supplying amphetamines and other synthetic drugs like crystal to the United States and to the Federal District. Their leaders have a messianic "bent" and have distributed documents that are treated like "revelations from god". The group became prominent and burst onto the scene when it threw 5 decapitated heads into a bar in Morelia two years ago.

Two weeks ago, it unleashed a wave of terror across Michoacan after one of its chief leaders ("la Tuta") was arrested. They targeted police and executed 16 in a few days, including 12 at one time. Their bodies were dumped in a pile beside a major highway in the State.